Roger Humbke grew up on a homestead, across the dirt trail from a one room school (New Berlin) in Alberta, Canada. His grandmother, father and mother all attended the same school which was renamed during WW I for fear of being 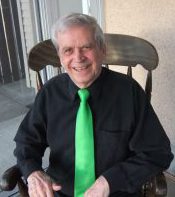 burned down. Roger attended the newly named Verdun School until grade 3, when they were bused to the village of New Norway.

There was no power, running water or telephone, but there was a battery radio and Roger’s imagination ran wild.  As a young boy, he was always interested in how things worked and would constantly take objects apart to see if he could put them back together into working order – most often failing. As a teenager, Roger was fascinated with science and on the family’s monthly trip to the small local cities of Wetaskiwin or Camrose, He would spend his .50 cent allowance on chemicals at the local drug store. It is hard to imagine the excitement he experienced when one day while exploring an isolated slough he found a recently landed weather balloon complete with a box of gadgetry attached. Instruction were to return it to the government, but the desire to open it up and inspect (and dissect) all the parts was just too great. His parents never knew!.

As a child with  ADHD (Attention Deficit Hyperactivity Disorder) and an Addictive Personality, Roger was an impulsive, inattentive child who was described as a pyromaniac and known as the black sheep of the family. .

Roger realized that he would need to control his impulses and when his mother put him in a one year program to train as a teacher at the University of Alberta and he made a big change. He switched his interest from science and math to the social sciences as he prepared to lead a more acceptable life.

Every chance he got he took courses in philosophy, creativity, abnormal psychology and criminology, but what really interested him was the states of consciousness, hypnosis and dreams. One elective offered him the chance to write a research paper on a topic of his choice and he chose “dreams”.  Off and on for the next 50 years he watched as the study of dreaming become more acceptable in Western higher academics and today one can study lucid dreaming at Harvard, Oxford or MIT.

Lucid dreams are dreams in which you are consciously aware that your are dreaming and that you can consciously control what you dream about, Personally, Roger has had various degrees of success in lucid dreaming and would like to invite Seniors and all generations to join him in his journey of becoming a practitioner. Remembering and controlling your dreams are skills that Seniors can learn, They enable you to change both the beliefs and the results you strive to achieve in your life time. Recent discoveries and research in memories and DNA point to exciting possibilities for lucid dreams and having conversations between your subconscious mind and deceased relatives. Imagine consciously controlling a conversation between your subconscious impressions of who your great grandfather or great grandmother were and your own subconscious mind.

On March 9, 2016 Roger started https://www.humbke.com – a website about the Humbke Family’s History (Humbke-Conradi-Callies-George-Fontaine-Harris) in the USA and Canada. His goal is to use Lucid Dreaming to connect with ancestors and relatives thru visitations within the dream world.